King of the Hill Wiki
Register
Don't have an account?
Sign In
Advertisement
in: Elderly, Hills, Characters,
and 5 more

The Unbearable Blindness of Laying

Originally married to Cotton, Tilly suffered abusive treatment, which lead to her obsessive glass miniatures collection and her eventual divorce. Though Hank assumed she was a housewife, she informed Hank in Peggy's Turtle Song that she was employed numerous odd jobs throughout his childhood, including a year as a taxi driver; Hank then realizes why she kept "a yellow car" for a year. After the years passed by, Tilly began to date Gary Kasner, a sort of womanizer with a Jewish background, whom Hank grew uncomfortable with at first, but came to like. However, it was revealed that Tilly later started dating Chuck Garrison behind Gary's back, a former hardware store employee whom, like Gary, worried Hank. Tilly eventually married Chuck and lived a new life in the RV that she purchased, away from her condo in Arizona.

Away from her dating life, Tilly enjoyed collecting miniatures and did activities with Chuck, normally those not suited for people her age. She is best described as overtly naive and far too trusting, even leading her overly-trusting son to refer to her as "an idiot". Such misadventures include sending her gold to an address from an mail scheme, assuming cruise control was in fact autopilot, and most of all, marrying Cotton. These multiple instances lead Hank to constantly worry about her. 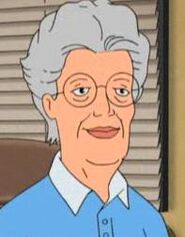