King of the Hill Wiki
Register
Don't have an account?
Sign In
Advertisement
in: Female Characters, Souphanousinphone, Season 7 Characters,
and 4 more

In 2002, she was forced to move to Arlen, Texas to live with her uncle, Kahn Souphanousinphone due to (according to Connie) a bad academic record.

Upon arriving in Arlen, she vandalized Hank Hill's fence multiple times with her street name, Q-Bag and met Bobby Hill. A science fair was coming up and Bobby asked her to be his partner; at this point she knew she could make him do anything she asked. While she had Bobby under her hold, she had him purchase cough syrup from a drugstore and steal multiple propane tanks from Strickland Propane by telling him that it was for their science project "How to Make Candy", when in reality, she was making methamphetamines. She had everything ready and went out to make a deal with a truck driver. When she returned, Bobby had already brought the project to the school science fair. She went to the school to pick up the drugs, but bailed after seeing Officer Soto, leaving the unaware Bobby with the drugs and makeshift meth lab in the process. Fortunately, Connie saved Bobby from a really bad legal situation, by destroying the meth equipment with a potato cannon.

Throughout the episode, it's revealed that Tid Pao planned to use the profits from her drug deal to repay a street gang whom she stole drugs from (the real reason she was sent to Arlen) and to fly first class back to Los Angeles. Eventually though, for unexplained reasons, her scam was uncovered and she was caught; it's very likely that after the science fair, Connie and/or Bobby reported her crimes (i.e the propane robbery) to their parents and/or the Arlen Police, resulting in her arrest. She was last seen shoveling manure on a dairy farm owned by Kahn's other brother in rural Wisconsin. This uncle warned Tid Pao that he was her last chance to do right stateside, and that if she caused any more trouble, she would be sent to her grandmother in Laos, which is far less luxurious than the United States.

She is never seen or mentioned in the series again.

She was voiced by famed actress from Charlie's Angels and Elementary star Lucy Liu. 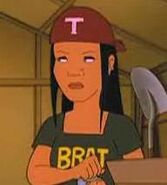