King of the Hill Wiki
Register
Don't have an account?
Sign In
Advertisement
in: Strickland Propane Staff, Minor Characters, Characters,
and 2 more

Renée Zellweger
Tammy Duvall is the latest "customer service associate" to arrive at Strickland Propane, following the death of Debbie Grund, who first appeared in the episode "Ho Yeah!".

She has somewhat of a low IQ, but seems to know that education is the best. She was kicked out of her apartment and stayed at the Hill residence for rent. She seems impressed of Peggy Hill and Luanne Platter's education successes, and even hopes to get a GED, similar to Lucky. Peggy says that she looks familiar to Debbie Grund. Hank Hill seems to have difficulty allowing her into his house, but gradually starts to accept her until he discovers that she is actually a prostitute who escaped the pimp Alabaster, who incorrectly thinks that Hank is acting as Tammy's pimp. Later, Hank pays Alabaster and tells him that Tammy is his "ho", and helps Tammy get Alabaster off her hands. Tammy is later seen in the episode, "Lucky's Wedding Suit", attending Lucky and Luanne's wedding. She is voiced by actress and native Texan Renée Zellweger.

In Ho Yeah!, Tammy has big red hair, She wore a blue crop-top with her bellybutton showing, along with a matching skirt with a huge dark blue line down the middle. Later, she wore a yellow top tied in the front of her, showing her bellybutton, wearing 2 gold rings on each wrists with her fingernails painted red, along with lavender or purple shorts and big white boots. 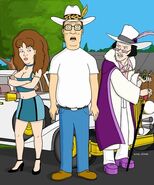 Promotional image for the episode
Community content is available under CC-BY-SA unless otherwise noted.
Advertisement