King of the Hill Wiki
Register
Don't have an account?
Sign In
Advertisement
in: Episodes, Season 6, Episodes featuring Dale,
and 2 more

Soldier of Misfortune is the one hundred-sixth episode of King of the Hill. It was first aired on December 9, 2001. The episode was written by J.B. Cook and directed by Anthony Lioi. Gary Busey guest stars. The episode name is an opposite of the term "soldier of fortune."

Dale Gribble is running for re-election as the Arlen Gun Club president, but his chances seem to be shot when he accidentally discharges his gun while telling a story. The day after, Mad Dog, Dale's rival, runs for gun club president in competition, and Dale starts to lose his confidence. To give Dale his confidence back, Hank pretends to be "Mr. Big," an anonymous persona, and answers Dale's advertisement in Soldier of Fortune magazine for hiring a private soldier/mercenary, and assigns Dale to pick up a briefcase. During the mission, Dale grabs the wrong briefcase belonging to a complete stranger and he throws sand in their eyes. Hank, who is spying on Dale to see he carries out the mission correctly, orders Dale to return to the bus station and return the briefcase, but Dale thinks that Mr. Big is using him as a drug mule and quits the mission.

Dale plans to flee the country in a panic since he thinks he is being hunted. The same day, Mad Dog hosts a party at his house to celebrate his newfound support, but Hank, Bill and Boomhauer go onto his property unannounced, and Mad Dog captures all three men. While Dale prepares to flee, he realizes that his friends are in danger and he needs to save them. As he goes onto the property, Mad Dog disarms him and puts him in the same room as his friends, who tell him that Mr. Big is actually Hank. Dale nearly gets his friends killed by Mad Dog by saying that the CIA is going to save him, and some flower delivery people come onto the property, showing that Dale was not bluffing about people coming. Mad Dog mistakenly thinks the flower deliverers are actual government people, and he flees the property.

Dale unties the gun club members, who also think that the flower deliverers are genuinely with the government. Dale promises to call them off if they all re-elect him as president, and they all agree. As Dale and his friends leave the property, Mad Dog's house blows up, shocking them. Hank wonders where Bill is, who yells that he already got outside the house but fell into another pitfall. Later, Dale recounts this story in an exaggerated fashion to his gun club buddies. 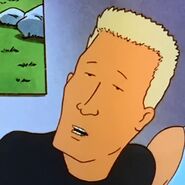