King of the Hill Wiki
Register
Don't have an account?
Sign In
Advertisement
in: Characters, Male Characters, Strickland Propane Staff,
and 3 more

Chris Rock (1998)
Phil LaMarr (2003-2008)
Roger "Booda" Sack is a character in King of the Hill. In his first appearance, "Traffic Jam", he was a stand-up comedian who taught defensive driving. He soon became an employee at Strickland Propane since the end of his debut episode from then on. He was originally voiced by Chris Rock in his debut episode, in later appearances, he's voiced by Phil LaMarr.

When he first appeared, Roger, known as "Booda Sack", was teaching at "Defensive Driving School" in "Traffic Jam" after his comedy career ended due to an inappropriate television appearance. Everyone thought the class was funny, except for Hank, who was shocked and embarrassed by Sack's crude humor. As an aspiring comedian, Bobby was a fan of Booda. Hank brought Bobby to a class, in an attempt to demonstrate that his hero is sad and lonely because of his poor life choices. The plan backfired when Bobby was invited to help Booda roast Hank, who complained to Booda's manager, getting him fired.

While asking for advice on his own material, Booda criticizes Bobby's appropriation of Black humor, and advises Bobby to get in touch with his "white roots" and write material from his own ethnic perspective. Bobby, unaware of his "white roots," inadvertently researches white supremacist websites with Joseph.

Trying out his new extremely racist act, the audience at Booda's club becomes belligerent. As Hank comes to stop Bobby, Booda comes to the rescue. To thank him for saving his son, Hank offers Booda a job at Strickland Propane. The episode ends with Hank and Booda, now called by his real name "Roger", having a back-and-forth "Yo Mama" roast. Hank's jokes are predictably lame, but Roger humors him anyway.

Years later, after an incident between Ladybird and a Black repairman, Roger proctored an online quiz that determined Hank to be a racist based on superficial evidence. He also has some level of proficiency with computers, which he demonstrated when Hank had to learn how to play video games and navigate social media. 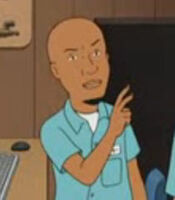 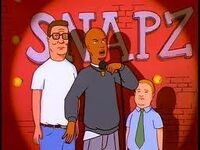