King of the Hill Wiki
Register
Don't have an account?
Sign In
Advertisement
in: Episodes, Season 9, Episodes starring John Redcorn,
and 3 more

Redcorn Gambles With His Future

Redcorn Gambles With His Future

Matt Engstrom
"Redcorn Gambles with His Future" is the one hundred-eighty-second episode of King of the Hill. It was first aired on April 10, 2005. The episode was written by Etan Cohen, and directed by Matt Engstrom.

Hank is in charge of organizing the Strickland Propane Family Fun Day. Meanwhile, John Redcorn and his band "Big Mountain Fudgecake" are having trouble finding a venue to play their music. Acting on Hank's advice, John Redcorn uses his land to open a casino (Speaking Wind Casino and Entertainment Center) so his band can have a place to play, and in turn Hank can have a venue to host the Strickland Propane Family Day. Trouble comes for both John and Hank when the police seize all gaming devices, telling Redcorn that Indian gambling is illegal in Texas, and that all the Indian nations agreed with the Texas Legislature to outlaw gambling in exchange for state and federal recognition. Back to square one, Redcorn plays for the Strickland Family Day, although he changes the lyrics to be family-friendly. This is seen by a talent agent, who gets Redcorn a contract as an entertainer. John Redcorn is then seen with his land being done up in a children-friendly Indian village, Redcorn's Land where he performs as a Mr. Rogers type, finally finding success. Redcorn was performing at the Maria's Pizza and Pasta at the stage. 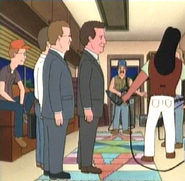 "This pen has been used by many of our people to apply for financing." 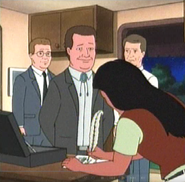