King of the Hill Wiki
Register
Don't have an account?
Sign In
Advertisement
in: Episodes, Season 1, Episodes starring Bobby,
and 7 more

"Pilot" is the first episode of Season 1. It originally aired on January 12, 1997. It marked the premiere of King of the Hill and the debut of its main cast.

When Bobby gets hit in the eye by the other boy with a baseball at one of his little league games, rumors of his father Hank abusing him start to spread. This episode guest stars Gailard Sartain as a case manager.

Hank Hill, his wife, Peggy, and son, Bobby, drive to a Little League baseball game. Along the way, Hank gives his son a pep talk, emphasizing the importance of winning. As the game gets under way, Bobby, who shows little athletic prowess, manages to get on first base, but he becomes distracted when his father offers coaching advice from the bleachers. A ball roars down the first base line and strikes Bobby in the face, leaving him with a black eye. After the game, Bobby accompanies Hank to the Mega Lo Mart. Two older women spot the pair from an aisle, as Hank throws a temper tantrum when he is unable to be directed to the hardware department, and the elderly women erroneously pass on that Bobby is being abused. Word spreads throughout the community, and eventually, a social worker named Anthony Page is dispatched to investigate the incident.

Page arrives at the Hill home just as Hank throws a temper tantrum (after banging his head on the hood of his car). Before Page interviews Hank, Peggy assures Page that her husband is as gentle as a lamb and Hank tells the social worker during the interview that his son received the black eye during a baseball game. He also emphatically denies ever hitting his son, and forces Page to leave. Meanwhile, Page remains unconvinced and begins interviewing neighbors and friends of the family, hoping to uncover the "truth."

Back at the Child Protective Services Office, the social worker discusses his findings with the case manager. Through this, Page comments his personal opinion of how that it is "redneck city." However, his boss then asks how he enjoyed his conversation with the baseball coach, revealing that Page never did talk to him about the black eye, which would have cleared up everything instead of jumping to the conclusion he did, which nearly got Bobby removed from his family. He is later removed from the investigation and fired. The boy then intercepts a phone call from the Protective Services Office, in which Page's boss apologizes for the misunderstanding. Bobby lies and tells Hank that if he continues to lose his temper, the government will take him away. Unaware that he is no longer under investigation, Hank heeds Bobby's warning and attempts to control his temper, no matter how much his son misbehaves. Eventually, Peggy learns from the case manager that the investigation was halted a week earlier and that Bobby deliberately neglected to tell anyone the truth a week later. When she confronts Bobby, he admits that he is doing it because he doesn't believe Hank loves him. Peggy tells Hank about the misunderstanding, which upsets him. Peggy tells Hank why Bobby lied and to let him know that he loves him, but Hank has trouble saying that because of his upbringing with his father. Later, Hank tells Bobby in his own unique way, how much he loves him, and they start to play fight. Anthony Page sees this from a bus, and tries to tell the man sitting next to him, but the man rebuffs him.

Hank Hill: "I'll tell you what my truck needs: Leadership. Detroit hasn't felt any real pride since George Bush went to Japan and vomited on their auto executives."

Hank Hill: (Shouting to Bobby after he destroys the fence) "Please respect my fence's right to be a fence. Now!"

Dale: "I know what's wrong with it. It's a Ford. You know what Ford stands for, don't you? It stands for "Fix It Again, Tony."

Hank: "You're thinking of a Fiat, Dale."

Anthony Page: Mrs. Hill, would you say that your husband has a bad temper?

Peggy Hill: Who, Hank? No, Hank is as gentle as a lamb.

Hank Hill: (Storms in the house, and catches Bobby's baseball. Shouts.) NO - MORE - BOUNCIN' - THAT - BALL! (Throws the baseball, which breaks a window.)

Anthony Page: "Mr. Hill, I feel that you're coming from an anger mindset, and if you're projecting your anger onto me, it gives me grave concerns as to how you facilitate your son's growth in private."

Hank Hill: "Mr., I have not begun to project my anger onto you!.

Hank Hill: "What the- loud is not allowed? Now, you listen to me, Mr.! I work for a livin'! And, I mean real work, not writin' down gobblety gook! I provide the people of this community, with propane, and propane accessories! Ho, and when I think of my hard-earned tax dollars, going to pay a bunch of little twig boy bureaucrats like you, it just makes me wanna... (Hank starts to lose composure.)"

Hank Hill: (Calmly, to Peggy) "Honey, bring me my bc headache powder, and a glass of water."

Hank Hill: (To Anthony Page) "Now, you listen here. You see that boy? (Motions to Bobby) That's my boy! And, if you ever try to take him away, so help me, God, I'll tear you a new one bigger than the Grand Canyon! Now, I want you to get out of my house! You're not welcome here! I mean now, before I give you a black eye! Get!"

Bobby Hill: "And, then, some weirdo came over, and started askin' a bunch of questions."

Joseph Gribble: "Yeah! He asked me if your dad ever whooped you. He hasn't, right?"

Bobby Hill: "No! Of course, not! You know my dad, he's all bark! Boy, that guy sure got him mad, though. My dad was like, (Starts imitating Hank) Get out of my house, my boy ain't much, but he's all I got!"

Joseph Gribble: (Laughs) "You do a great impression! Let me try! (Imitates Hank) I'm gonna tear you a new one! When I get my hands on you, you little peabrain! I'll bust your butt into little pieces!"

Anthony Page: (After he is convinced Hank is threatening Bobby, he rings the doorbell) "Bobby? Bobby, are you all right? Come on out!"

Hank Hill: (To Anthony Page) "I thought I told you to get lost!"

Anthony Page: (Ignoring Hank) "Come on, Bobby. I can put you in with a nice foster family in North Arlen, where you can develop healthy life adaptations! And, they've got a pool!"

Hank Hill: (To Anthony Page) "Hey, I've got a girl in here you can take right now!"

Anthony Page: (Still ignoring Hank, and keeps talking to Bobby) "Don't you want to live in a house with a pool?"

Hank Hill: (To Anthony Page as he starts chasing him off the property) "See, twig boy? Now, get your skinny butt off of my property!"

Hank Hill: (To Anthony Page as he chases the man to his car) "I said, get! Get! Get outta here!"

Anthony Page: (To Hank from inside his own car) "You are out of control!" (Starts his car and leaves)

Hank Hill: (fast) I love you no matter what you do. Phew, let’s go get something to eat!

Bobby Hill: I’m not... just a big disappointment to you?

Hank Hill: Disappointment? No, you make me proud! I’ve been disappointed by just about everything else in this town, but you? Not once. Dammit you’re ma’ boy! You should know better than that!

(Hank playfight’s with Bobby as they both laugh)

Anthony Page: (After witnessing Hank playfighting with Bobby) "He punched him! I knew it! I told him! Did-did you see that?" 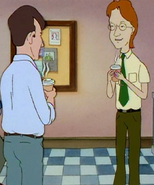