King of the Hill Wiki
Register
Don't have an account?
Sign In
Advertisement
in: Characters, Recurring Characters, Female Characters,
and 24 more

Nancy is a beautiful, curvaceous woman standing about 5'9. She has peach skin, a strongly-defined chin and wavy blonde hair.

While Nancy is generally nice to most people, it's revealed in "Nancy Does Dallas" that left on her own, she's ambitious, viciously competitive, backstabbing and nasty to anybody who gets in her way, but looking after Dale keeps her so busy that she doesn't have the energy to fight with people. Nancy feels that she "needs Dale more than Dale needs her" because he softens her into a likable person with friends.

She tends to call everyone "Sug" (pronounced "Shug", a shortened form of "sugar"), including God in the episode "My Own Private Rodeo".

As a television personality, Nancy's hair and appearance are extremely important to her, which shows she has a great sense of vanity. Nancy seems to not react to stress well, as she began to experience devastating hair loss, and her mother (voiced by Rue McClanahan) reveals that she also had hair loss and that it was caused by the stress of breaking off her own love affair. From this, it is surmised (though only through to her mother's assumption) that the only cure for Nancy's hair loss is to continue the affair. Nancy decides to wear a wig, and be faithful to Dale. In the episode “Hair Today, Gone Tomorrow“ it’s revealed that Nancy won the ”Best Hair Award” in high school.

Unlike her husband, Nancy is successful in her job, making enough to pay the bills, though Dale pays the cable bill. Dale admits that Nancy earns more money than he does, and she keeps a tight rein on their household expenses, thus revealing she is good at managing money. In one episode, Dale exclaims "I support this family!" and Nancy replies truthfully "I support this family, you pay the cable bill."

Nancy had a fourteen-year affair with John Redcorn, which produced her son, Joseph, although he eventually broke off the affair and she became a more faithful wife to Dale. The affair is known by almost all the neighbors. Peggy, however, was oblivious to this, being finally told by Hank. Dale and Joseph are seemingly the only ones who clearly do not know - which adds to the humor, since Dale is extremely paranoid, and Joseph is obviously of Native-American descent. Nancy broke up with John Redcorn in the season 4 episode "Nancy's Boys" when she and Dale began to reconnect. She also felt guilty when she realized Dale made it clear that, in spite of his strange behavior, still loves her to the point of sacrifice.  Her past relationship occasionally leads to concerns about her marriage. At one point she was afraid that a pretty female exterminator was trying to steal Dale away from her. Nancy's suspicions were later confirmed. This could have been a dramatic reversal of fortune for Nancy, who had cheated on Dale right under his nose for many years. Much to her surprise, Dale remained extremely faithful. In this episode it was revealed that Nancy smokes, although her having a cigarette while observing Dale's comfort with the female exterminator may have been a one-time-only reaction of nerves. In the episode "Untitled Blake McCormick Project", Dale discovers a neighbor's child is Joseph's half-sister (John Redcorn's daughter through a brief affair with the girl's mother, around the time Nancy became pregnant with Joseph). This revelation makes Nancy jealous or more or less angered that she was apparently not his only lover in the past. Dale believes both children were fathered by him because he thinks aliens stole his sperm.

Although generally loving to Nancy, Dale is occasionally insensitive, usually because of a scheme he has concocted. In "The Trouble with Gribbles" Dale began treating Nancy harshly in an attempt to win a lawsuit against a tobacco company. He had no personal complaints with the tobacco company, but felt a lawsuit would get Nancy enough money for cosmetic surgery, which she felt she needed after Luanne Platter briefly replaced her as a weather girl. In order to make the case that tobacco was ruining his life, Dale insulted Nancy's appearance unmercifully and blamed her "ugliness" on his secondhand smoke. Seeking a genuine and believable reaction, Dale did not tell Nancy the reason for his verbal abuse. The tobacco company was secretly recorded his tirades, and Nancy's hysterical reaction. Eventually his insults went too far, and the embittered, heart-broken Nancy left Dale and stayed with the Hills. In the end the Gribbles managed to reconcile after Dale expressed his undying devotion to her.

Her mother, Bunny Hicks, was similarly unfaithful to Nancy's father, much to Nancy's personal shock. Her mother deduced that she was suffering hair loss from stress from unresolved feelings for John Redcorn. She may have been half right, Nancy for the most part was afraid she'd give into temptation again; nor did it help that Redcorn would constantly follow her and hit on her. However, in the end, Dale intervenes before she makes a decision. Telling her that he wanted his last days (at least what he thought) with her; ultimately touched by his love, she leaves John Redcorn again. 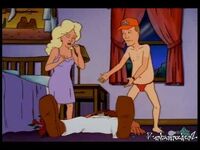 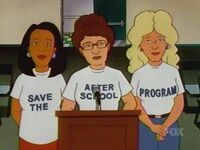 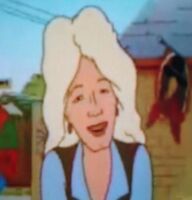 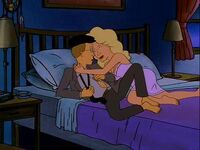 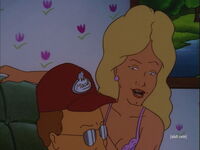 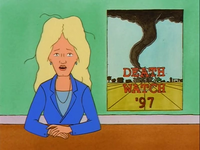 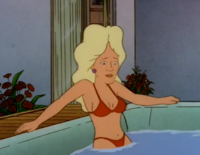