King of the Hill Wiki
Register
Don't have an account?
Sign In
Advertisement
in: Characters, Minor Characters, Female Characters,
and 2 more

Marion Ross
Ruby Wakefield is a character in King of the Hill. She is an old woman who used to live in Hank's home.

Ms. Wakefield only appeared in the episode "Ms. Wakefield," in which she relived old memories by visiting her childhood home. Just as suddenly as she arrived, she announced to Hank and Peggy that she wished to "end her days" in the house where she was happiest. After an attempt to break into the house, with the intention of dying there, Hank called the police to have her removed. Her obituary appeared in the paper the next day, though it is later revealed Ms. Wakefield herself wrote it so the Hills would let their guard down.

After another break-in scare, Hank's friends and neighbors pressure him into granting the old woman's last request. Ms. Wakefield then realizes she is being a burden when her presence makes everyone uncomfortable at the Hills' Christmas party and instead decides to enjoy the holiday celebrations with Hank and his friends. Hank tells Wakefield that she's welcome back for occasional visits.

Hank Attempts to pry Mrs. Wakefield from the wall 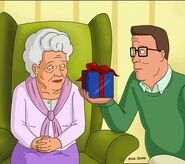