"The Son That Got Away"

Monsignor Martinez (short for Las Dias Y Los Noches de Monsignor Martinez (The Days and the Nights of Monsignor Martinez in English)) was a TV show that ran from 1997 to 2009. The Hill family would watch it every night at 9pm. It is a Spanish language TV show depicting a Spanish Catholic priest (played by actor Eduardo Filipe) who is a mercenary, and is often caught in action while at church.

His catchphrase, "Vaya con Dios" is often spoken when dispatching an adversary, and means "Go with God." He is voiced by Mike Judge.

1. The Son That Got Away

2. Three Days of the Kahndo

5. Flirting With the Master 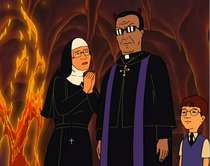 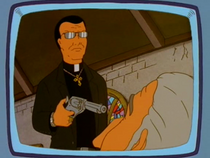 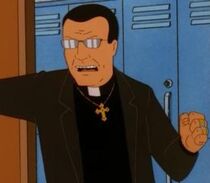 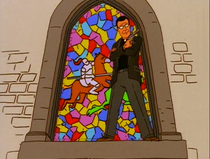 Add a photo to this gallery
Retrieved from "https://kingofthehill.fandom.com/wiki/Monsignor_Martinez?oldid=51912"
Community content is available under CC-BY-SA unless otherwise noted.