King of the Hill Wiki
Register
Don't have an account?
Sign In
Advertisement
in: Cast and crew, King of the hill voice actors 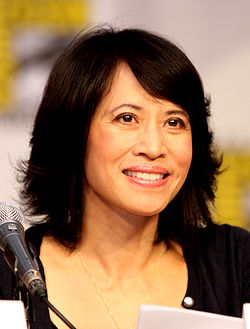 Lauren Tom (born August 4, 1961) is an American actress and voice actress perhaps best known for her roles as Lena St Clair in The Joy Luck Club, Julie in the TV series Friends, and for providing the voices for two animated TV comedy series. On Futurama she plays Amy Wong and her mother Wong Inez, and on King of the Hill she plays Minh and Connie Souphanousinphone.

Lauren Tom's first role in television was that of Miko Wakamatsu on The Facts of Life. She subsequently appeared on The Equalizer, Catfish With Black Bean Sauce, thirtysomething, Quantum Leap, Chicago Hope, Homicide: Life on the Street, Grace Under Fire, as Ross' girlfriend Julie on Friends, The Nanny, The Middle, a starring role in DAG, The Division, as Mrs. Ling on Monk, My Wife and Kids, Barbershop: The Series, Grey's Anatomy, The Closer and as Mai Washington Men in Trees. She also had an acting role in a bonus feature on the Futurama: Into the Wild Green Yonder DVD.

Tom began vocal work in the animated series Superman: The Animated Series (as Angela Chen). From there Lauren had minor roles on Pinky and the Brain, Extreme Ghostbusters and The Zeta Project before landing her lasting roles on King of the Hill, where she voices Minh and Connie Souphanousinphone and later Futurama, voicing Amy and Inez Wong.

She has also lent her voice to All Grown Up!, Rocket Power, Max Steel, Batman Beyond, Justice League Unlimited, Kim Possible, Numbuh Three (Kuki Sanban), Numbuh Three's mother Genki, and Numbuhs 44 and 45 on Codename: Kids Next Door, Susanna Susquahanna on Histeria! in 2003, the villains Gizmo and Jinx on Teen Titans, Yan Lin, Susan, Alchemy on W.I.T.C.H., The Replacements, Legion of Super Heroes, Jake's mom, Counselor Chang on American Dragon: Jake Long, and as Joo Dee on Avatar the Last Airbender. She guest-starred in The Penguins of Madagascar as Chuck Charles's co-anchor, Bonnie Chang, in "Gator Watch".

The voice actress also did the voice of Bai Li on the animated series, Kung Fu Panda: Legends of Awesomeness, recently in 2010.

Other animated movies Tom has voiced include Mulan II, Kim Possible: The Secret Files, Kim Possible Movie: So The Drama, Batman Beyond: Return of the Joker and the four Futurama movies: Bender's Big Score, The Beast with a Billion Backs, Bender's Game and Into the Wild Green Yonder.