King of the Hill Wiki
Register
Don't have an account?
Sign In
Advertisement
in: Episodes, Season 1, Episodes featuring Dale,
and 5 more

King of the Ant Hill

View source
watch 01:33
Wiki Targeted (Entertainment)
Do you like this video?
Play Sound

King of the Ant Hill

Gary McCarver
"King of the Ant Hill" is the eleventh episode of King of the Hill. It was first aired on May 4, 1997. The episode was written by Johnny Hardwick and Paul Lieberstein, and directed by Gary McCarver.

Hank is lawn obsessed. He is one proud man of his mower, his grass, and his entire layout. He would gladly sacrifice his life for his lawn. When the Cinco de Mayo block party approaches, he decides that Dale's weekly spraying onto the lawn is harmful after talking to Peggy about the problem, so he lets him go. Hank later decides to upgrade his lawn to the expensive St. Augustine grass.

Dale is livid, Hank is one of three customers that he has as regulars. He goes the distance, to prove to Hank that he could still maintain the beautiful lawn, with holistic measures. Hank declines. Dale sets up the trap to win Hank back, and get a bit of revenge in the mean time. He maps out a schedule to set out Fire Ants onto the prized grass. Meanwhile, Hank is the envy of all the neighborhood, especially Kahn, who is always competitive with Hank.

Slowly, Hank is noticing patches of the St. Augustine browning, and dying, with no explanation. He is crushed, and returns to Dale. Of course, Dale is aware of the problem, he is the one planting the Fire Ants strategically throughout the lawn. Dale sets to work on killing the problems, and completely destroys Hanks lawn in the process.

Meanwhile, Bobby has discovered the Queen ant, and her workers coming in and out of their nest, and captures a jar full. Days go by, with Bobby feeding them a sugar diet, and becoming hypnotized by the Queen's powerful pheromones. The Queen demands Bobby set her free, and Bobby is hesitant, at first, but complies with the Queen's orders.

The next day, Hank is heart broken. He has no shred of grass left on his dirt lawn now. Dale has completely ruined his beautiful trophy lawn.

Peggy goes on over to Nancy's house to talk about the Cinco de Mayo block party. Nancy offers her some sugar, but they are out, so Peggy volunteers to go on down to the basement and grab a bag. On her way down, she notices a strange display of fire ants, and wanders over for a look. She sees that Dale has a map drawn out, with all of the dates and times of release for the ants. Next to the map, is a huge tank of the remaining Fire Ants. She confronts Dale in a falls cont anywhere match, then heads home to tell Hank.

In the alley, Bobby releases the ants and as he talks proudly of the insects, the ants circle around and head strait for the unwitting boy. Peggy tells her husband what his neighbor has, and he is furious. Just as Hank is set to beat Dale up, he hears Bobby call his name. Hank orders Bobby to stand back and wait a minute, but when Bobby tells Hank that it is an urgent situation, Hank turns, and sees his son is covered, from head to toe with fire ants. He was attacked when he decided to obey the Queen, and release her and her subjects. Dale yells for Bobby to take his hand, and be still. Bobby obliges, the fire ants all scramble onto Dale, and subsequently sting him all at once.

Hank is relieved that Dale is immune to the fire ant bites as Dale wakes up. He thanks Dale for saving his boy's life, and drops the lawn issue. As Cinco de Mayo rolls in, Hank is depressed, and decides to stay in. Peggy is dancing around him, offering him one of her Margaritas. Hank is annoyed, and corrects her on the pronunciation of the drink's name. The doorbell rings, and Peggy calls him to the door, and all of his friends and neighbors are out there, holding squares of beautiful, plush, green lawn. They all pitched in to replace Hank's lawn, knowing how much it meant to him. He also reconciles with Dale and admits he was wrong to doubt him. The squares didn't cover the entire area, but Hank is on his riding mower, detailing sections as the credits roll. 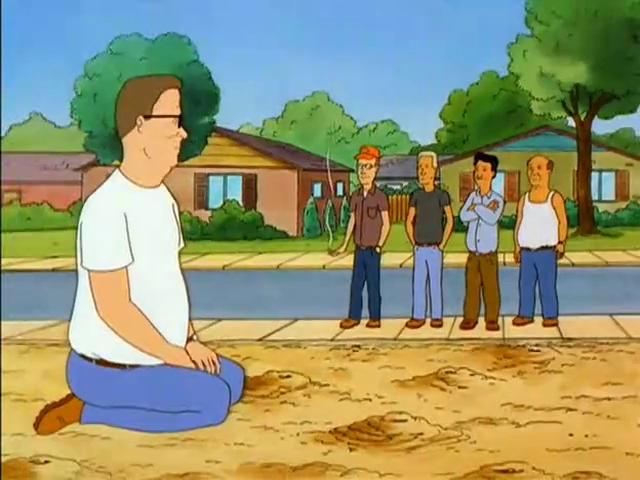