King of the Hill Wiki
Register
Don't have an account?
Sign In
Advertisement
in: Minor Characters, Male Characters, Tom Landry students,
and 3 more

Kidhauer is the fan-given nickname of a student at Tom Landry Middle School who resembles Jeff Boomhauer; fans speculate that Boomhauer is his biological father.

Kidhauer has never had a major role in the series; he appears sporadically throughout the series and speaks an occasional line. In earlier episodes he appeared to be a good friend of Bobby Hill's, but he eventually became a mere background character. His name was never revealed. When he spoke, his voice was provided by Brittany Murphy or Lauren Tom.

As implied by his fan-given nickname, Kidhauer greatly resembles Boomhauer; Both have similarly-styled platinum blonde hair, orange-tinted skin, and the same head shape.

He is almost always seen wearing an elbow-length sleeved beige shirt with red (Sometimes white) stripes. On the chest of the shirt are initials that read "K.H.". He always is seen wearing denim shorts. 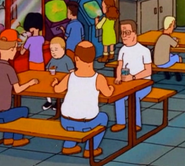 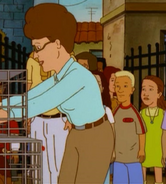 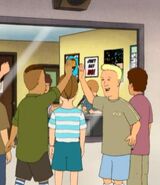