King of the Hill Wiki
Register
Don't have an account?
Sign In
Advertisement
in: Characters, Souphanousinphone, Male Characters,
and 23 more

Toby Huss
Kahn Souphanousinphone (born September 15, 1957), is one of the Hill's neighbors who lives with his wife Minh and daughter Connie. He is voiced by Toby Huss.

Kahn stands at 5'6". He lives with his wife Minh and his daughter Connie next door to the Hill Family. Kahn works in the information technology industry as a systems analyst. He originates from Luang Prabang, Laos. He first moved to Anaheim, California but left due to "neighbor problems" as told by Minh, as she tells him to get along with the neighbors - saying she was tired of "running" so much, first from Laos, then from California. He attends the Nine Rivers Country Club, which is comprised of almost all Asian members. Kahn is known to frequently "suck-up" to Ted Wassanasong, a fellow Laotian on the membership committee of the Country Club, who is not particularly fond of him at all. Kahn usually tries to push Connie to date Ted's son, Chane, rather than her dating Bobby, as he fears Bobby will drag her down from her studies and future. Kahn has a love-hate relationship with his Rainey Street neighbors, often insulting them by calling them "Rednecks" and "Hillbillies" and displaying a superiority complex, and other times showing kindness. He doesn't especially have friends in the neighborhood, most wanting to avoid him completely (even Bill) and being delighted when something bad happens to him. He does seem to be neutral to Boomhauer, as Boomhauer usually isn't the ringleader or causes problems. He also will come to Hank for advice at times. Kahn has been known to live with an unspecified form of bipolar disorder (referred to, at the time, as manic depression). In the episode "Lost in Myspace" and in "Just Another Manic Kahn-Day," Kahn has been shown to struggle with taking his medication.

Kahn works as a systems analyst in the Arlen area for seasons 1-3. In season 3 he is fired for leaking confidential information about a contract with the U.S. Army in an attempt to impress Hank. After a brief period of intermittent employment at minimum-wage jobs during which his family's entire savings are drained, Kahn secures a new job that pays $20,000 more per year than his former position, but is located in Houston, which is a three-hour commute from Arlen and a city that Kahn personally hates. In season 12, Kahn's job allows him to begin working from home. It is never explained how he handles the six-hour round trip to work in the meantime, though the fact that he is rarely seen in the alley in the evenings may indicate that he stays in Houston during the week and only returns to the family home on weekends.

Kahn was born and raised in Laos and subsequently spent time in Cambodia before immigrating to the United States. Due to growing up under two repressive Communist regimes, Kahn is the most conservative and patriotic of the regular characters, often exceeding even Hank in his staunch pro-Americanism. His chief recreational activity appears to be singing along passionately to popular American songs of the 1970s and 80s, a behavior which appears in multiple episodes and reaches a culmination in Pour Some Sugar on Kahn when he becomes involved in karaoke. 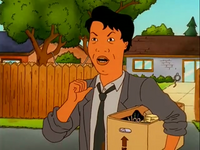 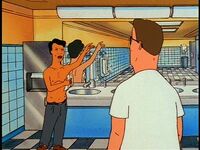 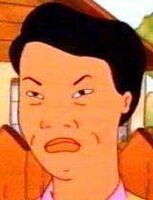 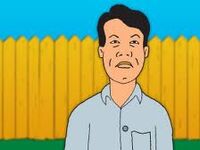 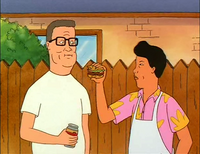 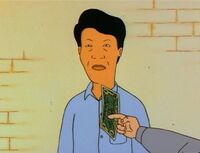 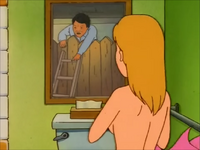 Kahn with his wife and daughter 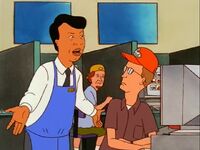 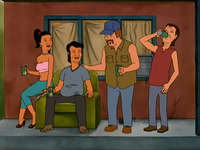 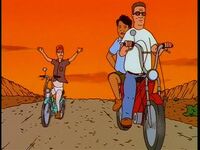