Assistant manager of a company that makes robots and robot accessories

Junichiro (born 1946) is Cotton Hill's illegitimate son and the half-brother of Hank Hill, who was conceived at the end of World War II.

His mother is a Japanese woman named Michiko who served as Cotton's nurse, draining the fluid from his legs after his shins had been blown off by machine-gun fire from Japanese soldiers and his feet surgically attached to his knees.

Cotton and the rest of the Hill family didn’t meet Junichiro until he was 52.

Junichiro looks, acts and talks like a Japanese version of Hank and shares many of his tendencies, such as shouting "Bwahh!" when startled; rubbing the back of his neck when he's nervous; and also having a narrow urethra (he is even more ashamed of this than Hank, saying he has never had the courage to propose marriage to a woman due to fear he couldn’t have a child with her). Junichiro works at a factory that makes robots and robot accessories, and he is passionate about his work because they’re clean and efficient, very similar to how Hank views propane and propane accessories. Junichiro is an assistant manager at his company, much like Hank's job as assistant manager of Strickland Propane - the only difference being that Junichiro is one of thirty assistant managers and is responsible for more employees than Hank. Junichiro is also fully fluent in English as well as Japanese, but like Hank, has a very outdated view of pop culture, referencing old actors and athletes such as John Wayne and Mike Tyson.

When Junichiro first met Cotton, he said he was ashamed of who his father was and wished he'd never been born. This made Cotton angry and he made a journey around Japan in order to spit in the Emperor's face. Junichiro reacts with horror at this, for if this occurs it will ruin his business reputation beyond measure. Junichiro and Hank teamed up to stop Cotton, and during this time the two brothers bonded and learned they had much in common. When they caught up to Cotton, Junichiro apologized to Cotton for what he had said and declared himself to be a Hill. Touched by Junichiro's apology, Cotton in turn dropped his plan to spit on the Emperor. Instead he told the Emperor that he forgave the Japanese for taking his shins ("No hard feelings, Tojo") and proudly introduced both of his sons to the Emperor.

Junichiro didn’t appear in the series again until "Lucky's Wedding Suit," in which he’s seen among the many guests at Luanne's and Lucky's wedding. That was also the last time Junichiro appeared in the series. 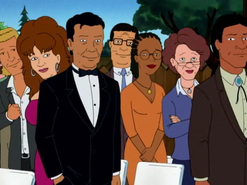 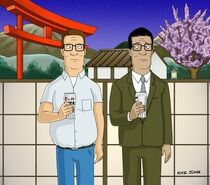 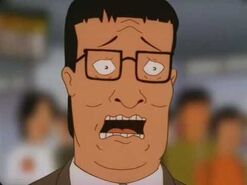 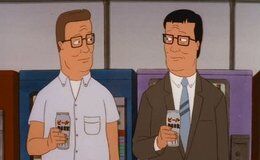