King of the Hill Wiki
Register
Don't have an account?
Sign In
Advertisement
in: Episodes, Season 2, Episodes that involve Crime,
and 2 more

Gary McCarver
"Jumpin' Crack Bass (It's a Gas, Gas, Gas)" is the seventeenth episode of King of the Hill. It was first aired on November 2, 1997. The episode was written by Alan R. Cohen and Alan Freedland, and directed by Gary McCarver. James Carville has a guest voice role as the Honorable Judge Roland McFarland.

The story begins with Hank and Bobby digging for worms. Bobby wonders why they are doing so when they can just buy bait at the store, and Hank calls it "cheater bait" and gives a speech about fishing with worms to back it up. He then hears someone fumbling around in his truck, so he rushes over and finds a man attempting to hotwire his truck. He places the culprit Billy Ray Walters under citizen's arrest. Later, at Arlen County Court, judge Roland McFarland, known for his unique sentences, sentences the suspect to live in the cab of an import truck for three months. Hank comments on the just and accurate ways of the judge; it also reveal that Walters has a pregnant girlfriend, which serves as a possible motive for his attempt to steal the vehicle.

After the trial, Hank goes to retrieve his truck from the impound, only to discovered that it has been disassembled due to the police checking if Billy Ray Walters hid any drugs in the compartments. Back at the Hill house, while Hank is looking for something, Luanne comes and tells Hank she retrieved the schematic to his truck and had already lined up the parts. Hank states because of the stress, he needs to fish now, which forces him to use a small rental car from Megalo-mart.

Hank then goes fishing with the guys. He uses his worms while everyone else uses manufactured bait. Boomhauer, Dale and even Bill catch numerous fish while Hank catches none. Desperate to catch a fish, he visits Layaway Ray's Bait N' Tackle which he hadn't visited recently. The owner, Ray Holiday is just preparing to burn the place down for insurance claims when Hank arrives. The shop is completely bare and empty with Ray commenting that he is going out of business because he cannot compete with Mega Lo Mart's prices. Hank tells Ray, who assumes Hank wants the usual fishing reel or rod, about his troubles catching fish as using worm's has let him down for the first time ever. Ray offers what little bait he has left but isn't enough to sway Hank into buying. Ray then tells Hank about Jack, an unschooled man who was raised "in the hills," and who is apparently so good with fishing bait that he "wrote the book on home-made bait," and who sells his stuff on the street out of his truck. Hank is hurried out and drives away just as Ray burns down his shop, causing his outdoor propane tank to explode.

Driving down a seedy part of the city, Hank comes across a young man standing on a corner. Hank asks for bait from the man, believing him to be Jack. Mistaking it for a drug code name, the man, a drug dealer, gives him a few vials of crack cocaine. Hank drives away with the contraband, when the view pans out to reveal to the viewer that the real Jack, who is shown fetching a crate from a truck with the words "Jack's Bate" on the side, was just around the corner.

Equipped with his new "bait", Hank goes fishing again. The fish keep coming for him, and his friends are amazed. They ask to try the bait but Hank denies them until he gives in. Now the fish keep coming as the guys reel in one after the other. Eventually, Hank notices that he is catching the same fish over and over. Hank tries to get the fish to go away but won't leave the proximity of the boat. Frustrated, Hank physically tosses the fish but comes swimming back, jumping over the boat and knocking Bill into the water.

Later, Hank becomes more inclined to go fishing as well as protect the bait from his friends because of all the fish he gets. Dale goes so far as to breaking into the Hill's garage to find the bait but is forced out by Hank carrying a running a weed trimmer. One day when Hank goes fishing again, this time however the fish keep avoiding Hank and the bait. When Hank gets home he gives Dale the vial of bait where at first is excited but immediately becomes skeptical asking what's wrong with it. Hank tells him that the fish aren't biting anymore and avoiding the boat completely. Dale explains to him using knowledge he learned from his enrollment at extermination school, he informs Hank that he has introduced a new element into the fish's eco-system, and with each passing time Hank fishes, the fish themselves become more immune to the bait until it doesn't work, much like how the worm failed before. He tell Hank that his solution is to get something stronger. He then sets out to get stronger "bait" from the same drug dealer. This time Dale follows him, desperate to get the new bait for himself, but the police arrive and apprehend all three.

In a room with his attorney, Peggy is in disbelief that Hank would go so far as to purchase crack cocaine but Hank swears he was under the assumption he was buying fishing bait. His attorney suggests pleading child-abuse as a reason for buying the illegal drugs but Hank stands his ground saying it was all a misunderstanding and the he is not a "doper". Hank and Dale are tried at Arlen County Court, with Judge Roland McFarland, who now is familiar with Hank, presiding over the case. He orders Dale gagged after Dale objects to his order to remove his hat and becomes disruptive. Judge Roland is perplexed and is prepared to pass down a guilty verdict. Hank pleads with the judge saying that he's only a fisherman and that he had no knowledge that he was buying illegal drugs. Judge Roland admits he doesn't like Hank's story but is willing to give him and Dale the benefit of a doubt. He decides to give the two one last chance to prove their innocence by going on a fishing trip. If the crack cocaine works as bait, they're free to go on account that they were truly mistaken but if they fail both Hank and Dale will be sentenced to 24 months in prison. When the two are escorted out the next case, titled "Fidelity Mutual Insurance Vs Layaway Ray's Bait Shop," begins, as Ray Holiday is on trial for insurance fraud.

On the fishing trip, Hank, Dale, the judge, and an corrections officer wait for Hank to catch a fish. After hours of trying the crack cocaine still doesn't work, with Dale attempting to fool Judge Roland with a frozen fish and gets threatened with a doubled sentence if he attempts to cheat again. As the day comes to a close Hank notices that he still has worms in his tackle box. With no other options he puts one on his hook, and Dale states that he would be cheating and they'd be spending double the time on their sentence. Hank replies that he was cheating with the "bait" in the first place, that he got greedy for wanting to catch as many fish as he could. He gives in saying that no matter what they're going to prison and if this was going to be his last day fishing in a long time, he would rather do it the right way. At the last minute, Hank gets a bite and pulls up a fish, a small one, but still a fish, allowing both Hank and Dale to be let off. 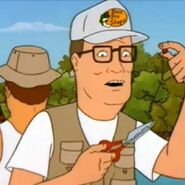