King of the Hill Wiki
Register
Don't have an account?
Sign In
Advertisement
in: Characters, Female Characters, Villains,
and 2 more

Peri Gilpin
Judy Barnes is a representative of Cozy Kitchen. She appeared in the episode "Peggy's Gone to Pots."

Judy is a woman approximately in her 30s with long brown hair tied in a ponytail. She wears a pearl necklace, white earrings, and a pink dress with a pink rose on the left side and a blue shirt underneath.

In season 11, Peggy volunteers to take Ted and Cindy Wassanasong's sales for Cozy Kitchen off their hands. Judy comes by Peggy's house to tell her about her sales, which are quite difficult and expensive to sell off. On occasion, Judy comes by looking for the money Peggy is supposed to give her, acting in a friendly but threatening fashion, even opening Peggy's garage with a crow bar to put more products inside.

To escape the contract, Peggy tries faking her death with Dale, but the plan fails after the floorboards above their dying area falls apart. Dale sees that a Cozy Kitchen frying pan is unharmed by the explosion, impressing the neighbors who witness this scene. Judy tells Peggy she can be free of Cozy Kitchen if she offers to be included in Peggy's fake death so Judy can escape Cozy Kitchen's reach as well, and Peggy agrees. 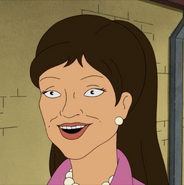 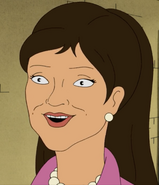 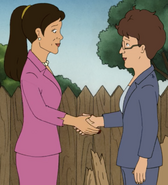 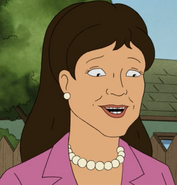 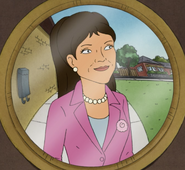 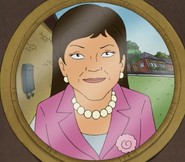