Boomhauer stands at 6 feet,[1] making him taller than Bill and Dale, but shorter than Hank. He has hazel eyes, platinum blonde hair, orange-tinted tan skin, and a strong somewhat rectangular chin. He is somewhat lanky but with a potbelly.

Boomhauer is typically seen wearing a dark gray shirt, blue jeans, and work boots. He also has a watch on his left wrist.

Boomhauer is highly astute and often gives advice to his friends. He is also a frequent voice of truth, owning up to the wrongdoings of the group despite not always acting appropriately himself. Since his speech pattern is not understood by most people, his confessions are usually ignored.

Boomhauer is a friend of the Hill family and hangs out in the alley drinking beer with Dale, Bill, and Hank. He is famous for his rapid pattern of muddled, nearly-incomprehensible speech. It appears to be genetic, as his grandmother, brother, and other Boomhauer family members speak the same way. He also peppers his speech with lots of "dang ol's" and "dadgums," often punctuating clauses with "man." It is revealed in "A Fire Fighting We Will Go" that Boomhauer actually sees himself as speaking clearly and everyone else speaking with his trademark speech pattern.

Boomhauer is a Texas Ranger and a confirmed bachelor with a taste for fast cars, women, and tiger-print bikini underwear. He drives a 1968 Dodge Coronet. In high school he had an infamous mid-60s Mustang named "Ms. Sally" but had to get a new car after Hank, Bill, and Dale accidentally drove it into a quarry while playing a prank on him. While attending high school with the three others, he played on the football team as the starting quarterback. His idol is Wilt Chamberlain (probably for both his athletic prowess and for his famous luck with women), and he is allergic to macadamia nuts.

Boomhauer's friends seem to consider him a source of good advice. He has a good relationship with Hank but occasionally loses his patience with Dale's insanity (calling him "Gribble"), but seems to be close to him, as its revealed in an episode that he and Dale leave every year on a Memorial Day fishing trip, disguised as Boomhauer going to a family reunion and Dale going to a UFO convention. They presumably don't invite Bill and Hank since Bill can get on both their nerves with his stupidity and Hank with his constant talking down of the group. Boomhauer also gets annoyed with Bill's inferiority complex (though respects him for helping him get over a woman). He is frequently the voice of truth and reason in their group, but since these confessions are barely understandable, they often go ahead, unless another character repeats what he said as though agreeing with him. He also proves to be rather cultured in one episode, calling Hank "ignorant" after Hank makes derogatory comments about modern art, and referencing Marcel Duchamp's famous Fountain and Dadaism.

Although considered something of a playboy by his neighbors, in I'm With Cupid, Bobby discovers that Boomhauer’s secret weapon for attracting women is merely barraging women until one finally agrees to go out with him. He also has trouble getting over break-ups. When his ex-girlfriend Katherine left him and went off to college, Boomhauer spent two days sitting in his hot tub. Peggy said she has never seen a man so sad and so relaxed than when Boomhauer was recovering from a broken heart. When he meets a jogger whom Bill lusts after, he spends several days (and nights) with her and gathers the courage to ask her to marry him, offering his Meemaw's ring. To his horror, she had been sleeping with another man and had only been dating him for the sex. Adding insult to injury, she admitted that she hadn't understood much of what he'd said since they met and mistakenly referred to him as "Boomhauser." Crushed, Boomhauer goes speeding down the street crying while blasting the radio in his car. Bill, no stranger to experiencing heartbreak himself, manages to pull Boomhauer back from the brink of desperation and motivates him to live life again. 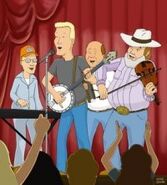 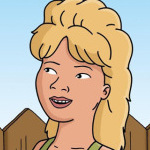