King of the Hill Wiki
Register
Don't have an account?
Sign In
Advertisement
in: Minor Characters, Recurring Characters, Strickland Propane Staff,
and 5 more

Hank's Got the Willies

Jim Dauterive
Jason Adderly is a minor character and employee at Strickland Propane. He is voiced by Jim Dauterive.

Jason works at Strickland Propane in an undefined role (not a salesman as he doesn't appear on the sales chart). He is the father of Howard Adderly, a ghoulish looking child in a flashback of Hank's during the Season 1 episode Hank's Got the Willies.

Jason apparently is trying to quit smoking he's seen at the Cigarender's meeting in the Season 1 episode Keeping Up With Our Joneses. He also is seen not wearing a Strickland Propane work shirt in his appearances, instead opting for a dress shirt and tie.

Jason slacking off in Junkie Business

Jason playing poker in Hank's Got the Willies 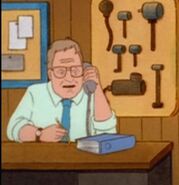 Jason on the phone in Are You There, God? It's Me, Margaret Hill