Henry Rutherford Hill (born April 19, 1953) is the protagonist of King of the Hill. Hank, along with his family (wife Peggy, son Bobby, and niece Luanne), has a central role in most story lines. Hank's voice is provided by series co-creator Mike Judge. The Economist briefly mentioned him as one of the wisest people on television.

Hank Hill stands 6'2" in height and weighs 220 lbs. Among King of the Hill characters, Hank bears one of the more noticeable resemblances to Tom Anderson, a character on Mike Judge's previous animated series, Beavis and Butt-head. The similarities in both voice and (to a slightly lesser extent) physical appearance between Hill and Anderson are especially noticeable when comparing early King of the Hill episodes to "Beavis and Butthead"'s final episodes or movie. Hank also inherited much of Tom's serious, conservative personality; the differences, however, reflect the differences in tone between the two series. Unlike Tom, a senior citizen whose grumpiness was typically as absurd as his antagonists' stupidity, Hank's humorously no-nonsense attitude makes him a sympathetic voice of reason within the series. He also expresses a love of propane, similarly to Anderson's admiration of butane which ironically Hank sees as an inferior gas. Hank is known to threaten people who have ticked him off with him saying, "I'm gonna kick your ass." Hank drives a red Ford Ranger (1997-2000), a red Ford F-250 Super Duty (2001-2008) and a red Ford F-350 (2009-2010).

Hank (born Hank Rutherford Hill) was born in the ladies' room at Yankee Stadium in New York City, NY to Matilda Mae "Tillie" and Cotton Hill. He originally thought his birthplace was in Texas, but on his quest to get a "Native Texan" license plate, he uncovered his lost birth certificate stating that he was born in New York, much to Hank's dismay. Along with Bill Dauterive, Jeff Boomhauer, and Dale Gribble, graduated Tom Landry Middle School and later pursued secondary education at Arlen High. After graduating Arlen High, Hank applied to the Army with his friend, Bill, but he was denied because officials thought he would be unable to relieve himself in a time of stress. He worked at Arlen's Jeans West during his late teen years and sold a pair of Jordache to his future employer, Buck Strickland, of Strickland Propane. Sometime at Arlen High, Hank began a relationship with Peggy Platter who would later become his wife. As seen in "Chasing Bobby", Hank owned a Maverick before his series of red trucks.

Hank is often regarded as the well-meaning, hard-working, traditional American. Everybody looks to Hank when they have any seemingly useless, or dull work that needs to be done. On the other hand Hank is easily angered when things don't go his way or when another person breaks something of his. When his dog Ladybird attacked a black repairman working on their heating system, he was accused of being racist, but it was later proven that she is only prejudiced towards repairmen in general, as she knows Hank is usually the one to make household repairs. Hank has briefly worked at Mega Lo Mart as a propane salesman trainee when he lost his job at Strickland Propane. Hank's reserved nature probably resulted from years of verbal abuse from his father Cotton Hill. However, if sufficiently provoked, Hank is just as willing to fight as his father, often proclaiming, "I'm gonna kick your ass!"

He is, for the most part, a staunch conservative (he once said dreamily that he missed voting for Ronald Reagan.) He was initially a huge fan of George W. Bush, but had second thoughts about voting for him because of his weak handshake, and when asked if he would vote for "the other guy," presumable Al Gore, he said "I don't know." He is a Republican, but admires old-school Democrats (such as John F. Kennedy and Lyndon B. Johnson). His dog Ladybird is named after Lady Bird Johnson, the wife of Lyndon B. Johnson. In one episode, Bobby chose to do a school report on his favorite president, Josiah Bartlet of the dramatic TV series The West Wing. When Hank discovered this, he scolded Bobby (not only because Bartlet is a fictitious character but also because Bartlet is considered to be a typical liberal president on the show), who proceeded to do his report on Ronald Reagan. Hank also has a great amount of respect for former Democratic Governor Ann Richards.

He considers his wife his best friend, and feels that physically punishing children is wrong; he is usually verbally strict, but does not usually hit/spank Bobby.

Political parties aside, he is very conservative and old-fashioned, naturally thinking everyone shares his sense of right and wrong and being largely ignorant of new trends and view points; several episodes involve him dealing with things like yoga, boy bands, etc. Hank is portrayed as having traditional family values, and he is shown to be uncomfortable with hiring a woman to work at Strickland because she was believed to be too attractive, even though she was overly qualified; instead, he hired a man for shallowly expressing a fondness for the Dallas Cowboys and a blatantly fraudulent adoration for propane. The man was later revealed to be a completely unreliable drug addict.

He does, however, share a few progressive values. One of them is his fondness for organic food in the episode "Raise the Steaks". He even goes as far as to defend the hippies, something he seemed somewhat ashamed to do but nevertheless found himself agreeing with them when it comes to natural food. He has also been shown to have fairly moderate views on issues like gay rights and other religions. Hank is an environmentalist (though he distances himself from the movement at large). He laments air pollution in Houston, believes that global warming should be fought, and opposes the building of McMansions. Despite his apparent naivety to general things, he has been shown to be very clever in various scenarios. These include tricking a crooked lawyer attempting to sue Strickland into making it appear as though he is the one that injured his plaintiff; forcing a veterinarian who was shaking him down on costly and unnecessary treatments for a soldier's cat to approve the cat's file, or Hank would tell the vet's customers about a completely inefficient imaging machine the vet couldn't afford; and getting the see-no-evil parents of a youngster who was bullying him to exert discipline by having Bobby behave exactly like their son towards them. He personally cracked down on a crooked mold expert with the help of Bill--giving him a taste of his own medicine.

Hank is very passionate about his hobbies, whether it be sports, woodworking, (or construction in genera) and playing his guitar.

He has shown to have chiroptophobia. When surprised, he reacts with a "BWAH!" or "BAAH!". This was used in the title of the episode "Mutual of Omabwah", and "Bwah My Nose."

Hank can be rather gullible, as for the past twenty-five years, he was buying cars at sticker price from Tom Hammond's used cars. He has also been tricked because of his relative ignorance concerning drugs or subcultures. Hence he once mistakenly bought vials of crack believing they were fishing bait and in a time of stress took a hit of marijuana because he thought it was a cigarette. He also signed a petition to legalize hemp not knowing that it was to legalize marijuana. Additionally, he interacted extensively with the owners of Stems and Seeds, a headshop, without understanding that the shop sold marijuana products. He also introduced a woman, who later turned out to be a prostitute, to several business associates. This led her former pimp, Alabaster Jones, to believe he was her new pimp.

In "Be True to Your Fool," a flashback reveals that shortly after Hank graduated from high school with his three best friends, Dale Gribble, Bill Dauterive, and Jeff Boomhauer, Bill enlisted in the United States Army. Hank admired Bill greatly for this decision, to the point that he stumbled drunkenly into a tattoo parlor and asked to have Bill's name inked onto his chest. However, Boomhauer persuaded the proprietor to put the tattoo in a less conspicuous place, the back of Hank's head; Hank had completely forgotten that night, but was reminded of it while undergoing treatment for head lice in the present. He had the name removed out of disgust, but eventually had a jailhouse tattoo of it put on to show Bill that the two were still friends.

In nearly every episode, Hank and his friends Dale, Bill and Boomhauer, will stand about in the alley behind Hank's house, drinking Alamo beer and discussing the events of the day. When consensus is reached, or they simply run out of things to talk about, they will give short words of agreement, such as "yup" or "mm-hmm."

Hank Hill makes his living as a propane salesman, and has developed a curiously obsessive relationship with propane. While most people would call a propane tank a barbecue accessory, Hank refers to grills and spatulas as "propane accessories" and becomes very upset when Bobby uses a spatula to slap the beats of the song "Wipeout" on his body. He often personifies propane when he speaks of it, with an affection that at times virtually borders on the erotic. In at least two episodes he refers to it as "Sweet Lady Propane". When Hank has a strange dream in which he is feeling very pleasant while barbecuing hamburgers with Nancy Gribble and they're both naked, it disturbs him greatly until Peggy tries to recreate the dream with herself in the nude instead - only to have Hank become distracted by a couple of young hippie women after striking up a conversation which quickly becomes a propane sales pitch. At this point, both Peggy and Hank realize that Hank enjoyed his dream because he'd been propane grilling, not because he was with Nancy in the nude. Hank says "I always thought of propane as a dignified lady...but she can be a dirty girl, too." 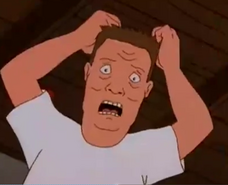 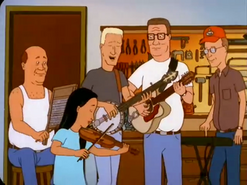 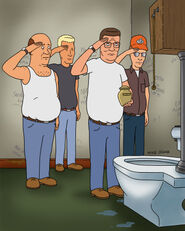 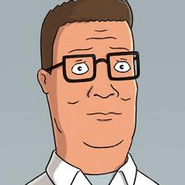 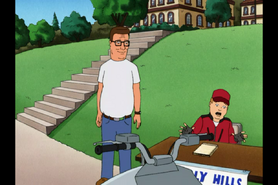 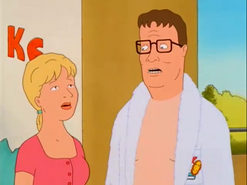 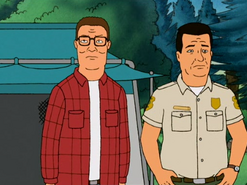 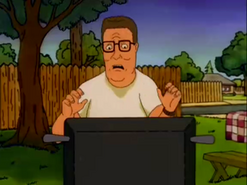 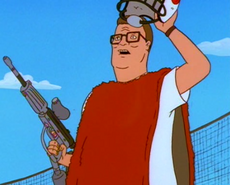 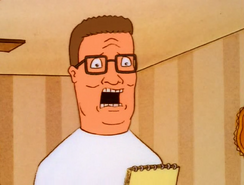 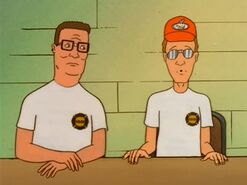 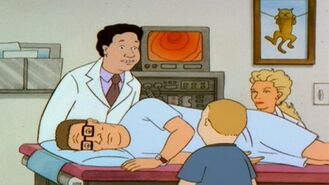 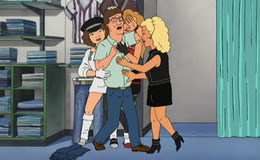 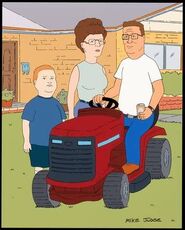 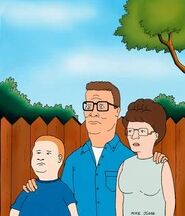 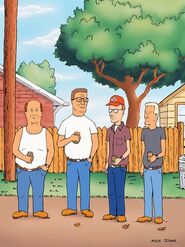 Hank's Birth Certificate
Add a photo to this gallery

Retrieved from "https://kingofthehill.fandom.com/wiki/Hank_Hill?oldid=50236"
Community content is available under CC-BY-SA unless otherwise noted.