King of the Hill Wiki
Register
Don't have an account?
Sign In
Advertisement
in: Episodes, Season 3, Episodes with Dale in the Title,
and 4 more

Tricia Garcia
Betty Thomas (live-action)
Dog Dale Afternoon is the 55th episode of King of the Hill. It was first aired on April 13, 1999. The episode was written by Jon Vitti, and directed by Tricia Garcia. The title is a reference to the 1975 film "Dog Day Afternoon".

Dale borrows Hank's mower without permission and after driving it to the store and running out of fuel he leaves it at a gas station unattended. Hank naturally is furious with Dale and scolds at him like a child, and Dale retaliates by buying a brand new state-of-the-art lawn mower, the Allegro X9J, code name "Redeemer". After Dale continues to gloat about his new lawn mower Hank has had enough and conspires with Bill and Boomhauer to steal Dale's state-of-the-art lawn mower.

They leave Dale clues about the theft, including ransom letters and photographs. Peggy even edited pictures to include aliens and former U.S. Presidents with the mower, which Dale instantly regards as being legitimate. Dale quickly becomes overly paranoid and somewhat crazy and he was barely getting any sleep. When Hank eventually decides to return the mower, Dale was doing a routine extermination at the clock tower at Arlen Community College. Bill saw him from the ground and mistook his equipment for a gun and he called 911 first from a payphone and then he called Hank who informed him not to call the police.

After Dale sees the police, he accidentally ignites the fumes from the extermination wand with his cigarette and he has to throw the tank at the police car because it catches on fire. This causes a small explosion and the police retreat. After reinforcements arrive Dale claims to have hostages and he believes it's part of the lawnmower "conspiracy".  After repeated attempts from the police, Hank, and Boomhauer over the police car loudspeaker, they allow Hank to go up and attempt to talk Dale down.

Hank admits that he took the lawn mower and convinces a still reluctant Dale to come down. As they are descending the tower, vigilantes from Dale's gun club fire at them. Hank jumps in front of Dale and takes a bullet for him. Dale is surprised to find that Hank is wearing a bulletproof vest and it is not a major injury. 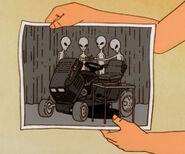