King of the Hill Wiki
Register
Don't have an account?
Sign In
Advertisement
in: Characters, Female Characters, Tom Landry students,
and 22 more

Lauren Tom
Connie Souphanousinphone, also referred to as "Kahn Jr." (born November 11, 1985) is the daughter of Kahn Souphanousinphone and Minh Souphanousinphone. She currently attends Tom Landry Middle School. Connie represents a typical Asian stereotype student who gets A's or better and dreams of good colleges. Her parents often refer to her as "Kahn Jr." as they both wanted a boy named after Kahn.

Standing 5'0", Connie is a 13-year-old Laotian girl. She has brown skin and has long, straight, and black hair. She almost always wears a blue/green shirt, red shorts, and brown sandals.

Her formal attire consists on pink dresses with a braid tied around her hair or pink jackets and skirts with her hair tied up in a ponytail.

Connie is an intelligent, kind young girl who is seen to be somewhat patient, as Bobby sometimes gets into trouble and may insult or hurt Connie in the process, in which they usually reconcile. Nonetheless, her patience does have a breaking point and will snap at either Bobby or Joseph when they get on her nerves, or when she is upset.

Even as her parents gave in to all of the pressure to have her life devoted to education, Connie was able to maintain her grades. However, she still desires to have a normal and sociable teenage life. Connie's name is based off of her father's because he originally wanted a son. He even refers to her as "Kahn Jr.", and so does her mother (in Aisle 8A).

Connie has a strained relationship with her father since he is very strict with her, refers to her as "Kahn Jr." because he wanted a son and expects her to date Chane Wassanasong, a boy that Connie considers a jerk, because he is Laotian like them and to get on his rich family's good agilities.

Connie's relationship with her mother is no better than the one she has with her father since she too is very strict with Connie and Minh always takes Kahn's side when it comes to who Connie dates or her studies but Minh sometimes takes a more sensitive approach to Connie's issues, but that is very rare.

Connie has a strong dislike of her paternal cousin Tid Pao due to the latter's unpleasant behavior and the fact that she once abandoned Connie at an amusement park. Connie's disdain for her got worse after Bobby, who had a crush on Tid Pao, decided to work in a science fair project with Tid Pao instead of her, leaving Connie with Joseph, and after Tid Pao nearly got Bobby in trouble with the police after he brought Tid Pao's meth lab to school for the science fair (believing that it was a candy factory) Connie ended up having to save Bobby right before Officer Soto realized what was going on. After that it is likely that Connie, Bobby or both alerted their parents/the police and got Tid Pao sent away.

Throughout the series, Connie and Bobby date on and off. Their briefly broke up during Bobby's birthday after he caught her kissing Joseph. Nevertheless, their relationship continued until they eventually realized they were better off as friends so they broke up yet even after they broke up for good, she and Bobby remained good friends and are often seen talking or hanging out together, much to Kahn's chagrin.

Joseph begins to show interest in her through the series as well while Connie showed some interest in him but lost most of it when Connie began dating Bobby. At one point, the two kiss but nothing else happened after that since Connie quickly went back to apologize to Bobby. Connie's explanation implies that she is attracted to Joseph for his looks alone after he hit puberty.

After Connie and Bobby break up, Joseph attempts to flirt with her a few times but Connie shows no interest and seems to find him annoying and slow minded since she insulted his intelligence out of anger after Bobby decides not to work with her in their science project (because he wanted to work with Tid Pao) by claiming that Bobby and Joseph couldn't make a decent project together. Joseph eventually moved on and developed interest in other girls and he and Connie still remained friends.

Connie's parents want Connie to date Chane just because he is Laotian and his family is well off economically but Connie is completely not interested in Chane and the one time she willingly went on a date with him she only did so to get back at Bobby for allegedly spying on her with Joseph (Bobby was really trying to stop Joseph from spying on Luanne) and in the end the date went badly for Connie since Chane was a jerk and even cheated on their game of mini golf. Meanwhile, Chane has flirted with Connie a few times, although he may have done so to annoy her and he seems more interested in bullying Bobby.

She is one of Peggy's students. Also, when Peggy tried to teach the cheer leaders routines, Connie took charge during the next game. She was an intern for Peggy and helped her get her Sizemore job. 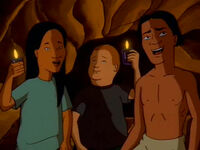 Connie with Bobby and Joseph Gribble 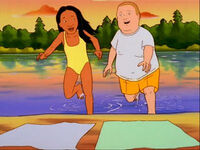 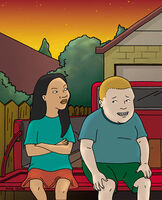 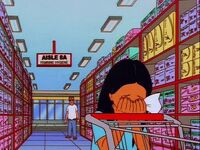 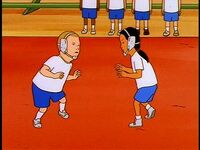 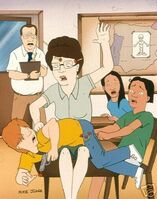 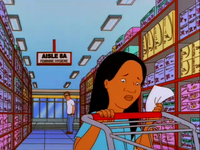 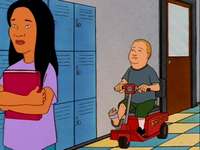 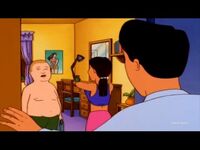 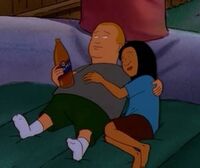 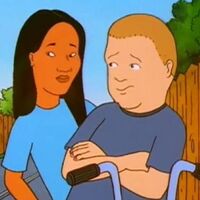 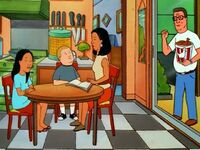