King of the Hill Wiki
Register
Don't have an account?
Sign In
Advertisement
in: Tom Landry students, Male Characters, Villains,
and 5 more

Pamela Adlon
Clark Peters is the overweight school bully at Tom Landry Middle School. He is voiced by Pamela Adlon.

He has a blond ponytail and speaks as though he has a perpetual head cold (Minh once referred to him as "that creepy booger-nosed kid"). He often targets Bobby and sometimes forces Bobby to do homework for him, except when Bobby writes down that his favorite hobby is to knit. (As his teacher remarked, "The Clark Peters I know likes to burn things.") 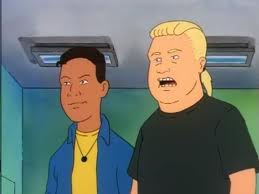 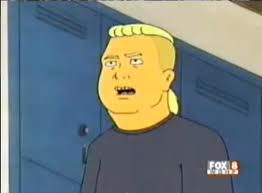 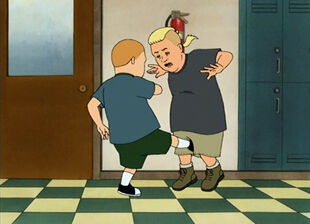 Bobby kicking Clark in the crotch in Bobby Goes Nuts.
Community content is available under CC-BY-SA unless otherwise noted.
Advertisement