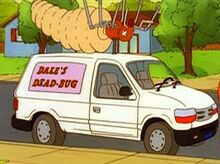 The Bugabago is a white Dodge Caravan C/V (Cargo Van) with black bumpers, gray seats, metalic interior, and with a large fake queen ant perched on the roof. The ant can be rotated to appear dead (legs up) or alive (legs down). Building the ant was a group project of Dale and his friends/neighbors Hank Hill, Bill Dauterive and Jeff Boomhauer to help them over the emotional turmoil they shared over the death of actor Hervé Villechaize.

The exterior of the first van consistently resembles a 1991-1995 Dodge Caravan C/V, but the dashboard/interior changes from episode to episode. In some episodes, the dashboard resembles that of a 1984-1990 Caravan. In other episodes, it resembles that of a 1994-1995 Caravan. The van has an automatic transmission and presumably a V6 engine. Since the series takes place in Texas, it is safe to assume that the van has air-conditioning as well. The van occasionally contains a rear passenger seat. The licence plate reads LXD-352.

In Of Mice and Little Green Men a previous version of the Bugabago can be seen during a flashback sequence. This van, based on a 1960's Chevrolet Corvair 95 Greenbrier Sportswagon, is light purple with pink type and features a dead hornet on the roof.

Dale typically uses his van as his daily driver, occasionally alternating between the van and his dark green 1972 Ford F-100. In addition to driving the Bugabago for his business, Dale also drove it for the company carpool when he briefly worked at Stik-Tek (although he had to remove the ant from the roof). When Joseph Gribble was twelve, he, Bobby Hill, and Connie Souphanousinphone took the Bugabago for a joyride, Joseph driving. The drive came to a quick end when Joseph hit a streetlight, totaling the vehicle and causing Dale to despair. Following the destruction of his previous van, Dale owns a white Caravan of the same generation as his old van "1991-1995". This one can be identified by having body colored bumpers, and a sliding door located on the right of the vehicle's body, as his previous van did not have these features.