King of the Hill Wiki
Register
Don't have an account?
Sign In
Advertisement
in: Gribbles, LGBT Characters, Male Characters,
and 3 more

"My Own Private Rodeo"

David Herman
Bug Gribble is the father of Dale Gribble, father-in-law of Nancy Gribble and the legal grandfather of Joseph Gribble. He's also the widower of Dale Gribble's mother. He was seen in the episode "My Own Private Rodeo".

He is homosexual and works at the Lonestar Gay Rodeo. Bug also has a boyfriend named Juan Pedro. He was hated by Dale for years after Bug grabbed his son's wife, Nancy, and kissed her at their wedding. As it turns out he was using this as a cover up for his homosexuality because at the time he was flirting with a gay Filipino caterer who was part of the wedding party crew and was about to kiss him. Upon seeing Dale, he grabbed the nearest woman he could find, who turned out to Nancy, and kissed her as a cover-up because he was insecure at the time and didn't want Dale to find out he was gay.

Years later, with help from Hank, the two reconcile their differences. When Bug first tries to tell Dale he's gay and that Juan Pedro is his partner, Dale again hates him after he is convinced his dad's a government agent. Dale then goes to the rodeo to inform the men there his dad is monitoring them. However, after he sees Bug kiss Juan Pedro, Dale realizes that his dad was telling the truth and is perfectly fine with it.

In a flashback Dale has earlier in the series, his father can be seen giving him a ventriloquist's dummy for his birthday (much to Dale's chagrin.) He can also be seen in a flashback early in the series about looking after their sons in the "The Order of the Straight Arrow". In this older style of flashback he looks just like Dale does now, however even in the older depictions he’s still called "Bug." Most likely, this is another instance of a character being retconned in appearance and personality as the series progressed. 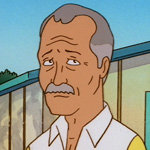