King of the Hill Wiki
Register
Don't have an account?
Sign In
Advertisement
in: Characters, Strickland Propane Staff, Male Characters,
and 18 more

Operator of the Strickland Propane

"Shins of the Father"

Stephen Root
Buck Strickland (born September 26, 1931; age 67) is the owner, founder, and operator of the Strickland Propane family of Propane dealers in the Texas area.

Buck is an old man with combed receding gray hair. He wears business suits most of the time, and at home he is shown wearing bathrobes.

Buck Strickland is the boss of Hank Hill and historically known for his modest start in the business and general business smarts. These attributes have been worn away by life and been replaced with many habits which often come in the way of his business decisions. He is also known for his many affairs and his off-and-on marriage to Elizabeth Strickland. Buck is something of a surrogate father figure to Hank after Hank's real father Cotton has given him nothing but frustration and heartache.

Buck Strickland first met Hank Hill at Jeans West, where Hank sold Buck a pair of Jordache. Impressed by the young man's salesmanship, Buck headhunted Hank into working for him by offering a management training position and a higher salary than Jeans West. Buck Strickland taught Hank the virtues of the propane business with a passion that Hank soon picked up. They worked together for many years and Hank began to carry much of the burden of business as Strickland slowly lost his passion and interest in his work. Buck began to spend more time at the Everwood Country Club playing golf while Hank ran the day-to-day operations of Strickland Propane. However, Buck also engaged in less notable activities such as drinking, frequenting strip clubs and engaging in extra-martial sexual affairs. Besides all of his shortcomings, Hank has rarely seen beyond his original perception of Strickland being a well-kept, honorable and smart business leader unless the consequences of Strickland's decisions are going to seriously negatively effect his coworkers, customers and family life.

Buck is a successful businessman and often uses his wealth to try and get with younger women, and on one occasion he even proposed to Luanne, who turned him down because he was too old for her.

In addition to Strickland Propane, he owns Sugarfoot's BBQ and many other businesses.

He is a compulsive gambler, betting on virtually any event or game. However, he seems to prefer pari-mutual betting (dog and horse races). His habit is to the extent he would even use company profits to continue playing and has even made wagers on underground betting and bloodsports.

In more recent times, Strickland has shown very little care for his employees, including Hank which he has professed to be his “Golden Goose” suggesting Hank's diligence and work ethic are largely responsible for keeping his business afloat. He has fired people on a whim and even closed the whole Arlen Strickland Propane business without severance for employees; a decision brought on by heavy competition and reversed under extraordinary circumstances.

Even with all of his shortcomings, Buck Strickland is known to come around when times get hard and make things right for himself and the people around him. 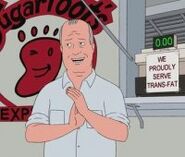 Buck with his brother Randy