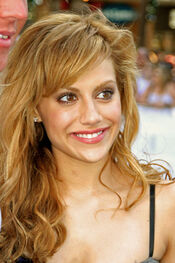 Brittany Anne Murphy-Monjack (November 10, 1977 – December 20, 2009) was a voice actress on King of the Hill portraying Luanne Platter and Joseph Gribble before he went through puberty.

Retrieved from "https://kingofthehill.fandom.com/wiki/Brittany_Murphy?oldid=54057"
Community content is available under CC-BY-SA unless otherwise noted.