Tricia Garcia
"Bobby Goes Nuts" is the one hundred and fifth episode (season 6, episode 1) of King of the Hill. It was first aired on November 11, 2001. The episode was written by Norm Hiscock, and directed by Tricia Garcia. In this episode, Hank signs Bobby up for boxing classes at the YMCA, but Bobby instead signs up for the women's division and learns how to protect himself by kicking other boys in their groins.

Connie invites Bobby to liven up her boring slumber party, but Chane and his gang crash the party and make fun of him. Kahn kicks all the boys out, forcing Bobby to exit through the window while Chane and his gang gets to use the front door. Outside the house, Chane attacks Bobby, making him literally eat dirt.

Hank is disappointed in Bobby's weakness and attempts to enroll him in a boxing class at the Arlen YMCA. However, when Bobby gets there, all the boxing classes are full, so he instead signs up for a women's self-defense course, where the primary attack is a groin kick while yelling phrases such as "That's my purse!" and "I don't know you!" Bobby quickly catches on.

Later, at school, Chane and his friends harass Bobby again, but when Bobby is shoved onto the ground, he yells, "Let go of my purse!", confusing the attackers. He then kicks Chane in the groin, and the rest scatter. Going home, Bobby happily tells his parents that he won the fight with Chane. Hank and Peggy are proud that their son successfully defended himself, but only because Bobby left out the detail of how he won the fight.

After that, every time Bobby is confronted, he kicks the offender in the groin and quickly makes everyone in the school afraid to go near him. This repeated action gets him a visit to Principal Moss, who calls his parents in for a conference regarding Bobby's imminent suspension. Hank is proud of Bobby for defeating the bullies, but he and Peggy are upset when he hears of Bobby's groin-hitting, something considered unacceptable in school-yard fights among young men. Bobby tells his parents where he learned the move, and Peggy quickly reminds Hank this is his fault for sending Bobby to the YMCA in the first place.

Hank decides to teach Bobby himself, and tries to show his son some boxing techniques and warns his son he may need to take a few hits before he gets it. The lesson doesn't go well, and Hank pops Bobby in the face a few times and doesn’t go easy on him. Ultimately becoming enraged, Bobby savagely kicks Hank in the groin, who quickly collapses in agony. Hank wakes up when he hears Bill declaring that he was kicked in the testicles, and the paramedic says he was able to locate one testicle by palpation. He then adds that he wasn't able to find the other testicle (much to Hank's consternation), but he's pretty sure it will turn up when the swelling goes down.

As a result, Hank is barely able to move and will need several days to recover. Bobby is initially apologetic but gets angry when Hank grounds him with no TV or video game privileges. He also bans him from eating ice cream and gives him a long list of chores. Bobby sneaks into Connie's house and runs into Khan who is angry over what Bobby did to Chane but happy over what he did to Hank, leaving him confused. He encourages Bobby to rebel, reminding him Hank can't move so won't be able to enforce his punishment.

Later Hank hears Bobby playing his Gameboy and demands he turn it off and hand it over. Bobby casually refuses Hank's demand and ever-increasing threats of punishment - taking advantage of Hank's injured testicles.  Bobby ignores Hank and walks away, resulting with Hank painfully standing and trying to catch Bobby, who keeps his Gameboy out of Hank's reach. As Bobby blatantly disobeys his father, Peggy decides enough is enough and steps in, demanding Bobby gives her the Gameboy. Bobby refuses, amused his mother is trying to take him on however when he goes outside she has Hank hold her glasses and squares off with Bobby, giving him several "love taps" to the face (similar to Hank's abortive boxing lesson) and using her arm length to hold Bobby off and keep him from landing a blow in return.

Bobby then tries to use his groin-kick but is horrified when Peggy doesn't flinch. She explains that she does not have testicles to hit, then humiliates Bobby by gives him a series of noogies in front of all the neighbors. Hank finally calls her off and explains to Bobby that he can get her to do that whenever he wants, pointing out that he now knows what it’s like when someone doesn't fight fair. Upset that his fight move failed, Bobby grudgingly goes inside to wash up for dinner, as a triumphant (but still in serious pain) Hank hobbles in behind him. 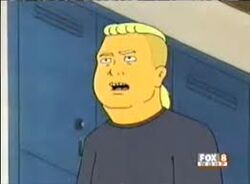 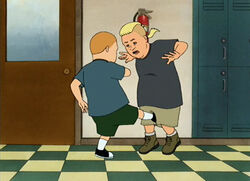