King of the Hill Wiki
Register
Don't have an account?
Sign In
Advertisement
in: Episodes, Season 7, Episodes focusing on Bobby,
and 2 more

Kyounghee Lim and Boohwan Lim
Bad Girls, Bad Girls, Whatcha Gonna Do is the 129th episode of King of the Hill. It originally aired on November 17, 2002.

Bobby becomes a science fair partner to Connie's criminally-minded cousin, Tid Pao who uses him to set up a meth lab.

Bobby plans to be Connie's science fair partner, but he meets her cousin Tid Pao and takes a liking to her. Infatuated, he becomes her partner instead, thinking she's cool even though Connie warns him that she is trouble. Tid Pao is living with the Souphanousiphone's to hide from a gang she stole drugs from in her hometown of Los Angeles (although the family uses a cover story of her needing a change of scenery due to a poor academic record). After she gets settled in Arlen, she comes up with a plan to manufacture more drugs to make enough money to repay the gang and fly back home first-class, using Bobby's liking for her against him to get him to do things for her such as buying cough syrup and stealing propane from Strickland Propane. She gets a sizeable cash advance from a truck driver at a rest stop to help fund the meth lab, after telling the trucker a false story.

Bobby naively believes that Tid Pao is making candy. The day of the science fair comes and after Bobby sets up their 'candy machine', Tid Pao leaves when she realizes that a uniformed policeman, Officer Soto, is one of the judges. That is when Connie, who was partnered with Joseph after Bobby ditched her for her cousin, realizes that he is making drugs and informs Bobby, who becomes shocked and begins to panic. Bobby furiously struggles to wipe his name from a beaker and realizes his attempt to hide his connection to the drug manufacturing is futile. Bobby begs Connie for help and quickly apologizes for being stupid and not listening to her when she tried to warn Bobby that Tid Pao was a bad apple. Connie destroys the evidence using Clark Peters' Potato Launcher invention to smash the ‘candy machine’ just before Bobby gets busted by Officer Soto and the other judges, thus saving him.

Later, it is shown that Tid Pao was caught (most likely due to Connie and/or Bobby tipping their parents and/or the police about her crimes) and was sent by Khan to live at her other uncle's farm in rural Wisconsin, having nowhere else to go other than her Grandmother's in Laos, which according to her uncle, is where she would be sent next should she screw up again. He then puts her to work shoveling manure in order to keep her busy and out of trouble.

Back in Arlen, the Hill family eats out at a new sushi restaurant, where Hank and Peggy enjoy the cuisine. 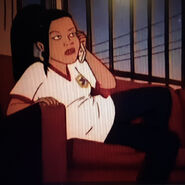