Dave Gruber Allen
"Appleseed", real first name Stuart, is a hippie and an alcoholic who Hank encounters first in "Phish and Wildlife", then in the episode "Bill's House", and again in "Raise the Steaks." He is named after the real folk hero, John Chapman, better known as Johnny Appleseed.

Appleseed is a skinny, elderly man with gray, long receding hair. He has a full gray beard as well, and he usually wears long-sleeved shirts in later episodes. In his debut he is seen wearing a short-sleeved tie-dye shirt with brown cut-off shorts.

Appleseed was an alcoholic who was homeless and followed hippie gatherings, until he received treatment in the episode "Bill's House". Hank later encountered Appleseed in the meat section of the Mega Lo Mart, where he introduced Hank to the CornuCO-OPia. Later, he and other employees lost their job at CornuCO-OPia then were rehired at Mega Lo Mart. At the end of the episode, we are led to believe Appleseed has become an independent rancher.

Appleseed is a stereotypical hippie, with environmentalist and anti-capitalist views. He is generally a peaceful "free spirit", and possible eco-terrorist as shown in Raise the Steaks. His alcohol and drug use may have led to memory issues, as he did not recognize Hank when he met him a second time. In "Raise the Steaks" he and his coworkers are against profiting, claiming it is evil. At Hank's request, he escaped with two cattle to an undisclosed location and after a time, wrote a letter to Hank without a return address, including a picture of Appleseed and a calf he says he named "Hank". 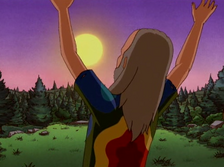 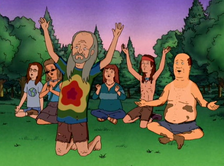