King of the Hill Wiki
Register
Don't have an account?
Sign In
Advertisement
in: Characters, Villains, Male Characters,
and 2 more

Alabaster Jones is a pimp who lives in Oklahoma City, Oklahoma. He was guest voiced by rapper Snoop Dogg in his debut.

Tammi Duvall had worked under Alabaster in Oklahoma. When she moved in with the Hills in "Ho Yeah!", Alabaster believes that Hank Hill is a pimp who has stolen her, so he confronts him at his house and demands her return. Hank goes to the library to tell Tammi about Alabaster's presence, showing Peggy that she was a prostitute. As Hank drives Tammi back to his house, Alabaster rams into Hank's car, ensuing in a car chase. In the chase, Alabaster loses one of his expensive car's hubcaps. Soon, Hank stops the car but tells Tammi she will not go back and he will confront Alabaster himself. Hank puts on his cowboy hat and exits the car, giving Alabaster the money that Tammi earned from her recent side prostitution. Alabaster believes that Hank is shorting him on the amount of money Tammi earned, but Hank angrily says he is telling the truth. Alabaster is intimidated by Hank and decides to leave, but not before offering Hank to buy the "jasper brunette" woman in Hank's car, who is actually Peggy. Hank angrily states that Peggy is his wife, and Alabaster laughs since he believes a pimp's worst mistake is "marrying one of his hoes."

He drives a highly ornamented Excalibur Series V and wears expensive and stylish clothing. Alabaster had a small cameo as a pimp being beaten by Virtual Hank of the video game in the episode "Grand Theft Arlen". 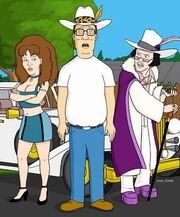 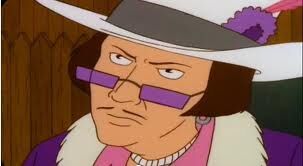