King of the Hill Wiki
Register
Don't have an account?
Sign In
Advertisement
in: Episodes, Season 5, Christmas,
and 3 more

'Twas the Nut Before Christmas

'Twas the Nut Before Christmas

Jeff Myers
"'Twas the Nut Before Christmas" is the ninety-second episode of King of the Hill. It was first aired on December 17, 2000. The episode was written by John Altschuler and Dave Krinsky, and directed by Jeff Myers.

Bill opens a Christmas village in his yard for the holiday and plays the neighborhood Santa after a visit to the post office inspires him to do more Christmas charity. Hank is relieved that Bill hasn't gone into another seasonal suicidal tailspin, as in "Pretty, Pretty Dresses." But Bill is so entranced by the magic of the holiday that he keeps it going long after Christmas is over, even buying a giant Santa Claus Bounce for his Christmas village after New Year's Day. His Christmas spirit gets the attention of a single mother with two children, which would be a fantasy come true for Bill. However, the single mother, Marilyn, leaves Bill after feeling very uncomfortable with his continuation of his Christmas village and his Santa role even shortly before Valentine's Day.

He also gets the attention of a teenage slacker who plays on Bill's emotions. Bill sees him as a "wayward waif" and a surrogate son. It's clear to everyone else that the youth is using Bill for money, cigarettes and alcohol; this leads to Bobby, Connie and Joseph getting buzzed in the bounce house Bill set up. Bill however, refuses to believe this. The slacker, named Wally, also gave Bill a belt sander, which is soon revealed to have been stolen from Hank after the serial number matched that of his belt sander's insurance card. After Bill confronts Wally, Wally decides to leave, thinking that Bill has no faith in him. After he leaves, however, Wally is arrested after buying things with Bill's stolen credit card and stealing Bill's car. Bill eventually does come to his senses and convinces the Judge to have Wally enlisting in the army rather than send him to jail. 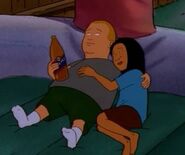